Skip to main
Kress Collection Curated Gallery
The Kress Program in Paintings Conservation at New York University's Institute of Fine Arts brings together two of the Kress Foundation's key programmatic commitments. It provides a wide range of conservation services to the dozens of regional and campus museums which collectively steward the Kress Collection of Old Master paintings and sculpture, some of which may not be in a position to secure such services locally. It also provides a unique training opportunity for graduate art conservation students wishing to learn about the study and conservation of Old Master paintings.

Hosted for more than twenty years by the IFA Conservation Center, this program is directed by its founder, Dianne Dwyer Modestini, Conservator of the Kress Program in Paintings Conservation and consulting conservator to the Kress Collection.  Working with colleagues around the country, the program identifies works from the Kress Collection that require or would benefit from comprehensive technical examination, cleaning, and restoration, and which lend themselves to examination and treatment in an instructional setting. Under the direction of Professor Modestini and Shan Kuang, Associate Conservator of the Kress Program in Paintings Conservation, students carry out thorough technical examination and materials analysis of these paintings prior to their treatment.  The close proximity and active interest of art historians, both at the Institute of Fine Arts and the Metropolitan Museum of Art, often results in collaborative examinations and the discovery of new information about attribution, workshop practice, painting technique, original display, and later alterations.

If you are interested in having one or more of your Kress Collection works considered for conservation through this unique program, please contact Dianne Dwyer Modestini via email at: dianne.modestini@nyu.edu.

To see other ways the Foundation supports conservation, please see the Conservation listings in the News section.

The history of the Kress Collection, briefly chronicled elsewhere on this website, unfolded in meaningful if overlapping stages across several generations. The development of the collection, initiated in the late 1920s and culminating mid-century, was followed by the strategic distribution of the collection to scores of municipal and academic art museums throughout the country, culminating in turn in 1961. There followed a half-century long commitment, taking manifold philanthropic forms, to the ongoing care, study, and publication of the Collection.

While Pichetto (1887-1949), pictured below with Samuel H. Kress, was primarily responsible for the care and restoration of the Kress Collection, he also played a wide-ranging role for Kress and the Foundation. He acted as an advisor on the acquisition of paintings, based on their condition, and undertook any necessary restorations, but more generally Pichetto played a key role in the building of the collection, from the assessment of potential acquisitions to the assignment of artist attributions and titles, from the details of valuation and shipment to those of eventual display, installation, and publication, whether at the National Gallery of Art or elsewhere across the nation. Pichetto, and the increasingly large staff he employed, performed these wide-ranging services from a variety of studio locations in Manhattan. 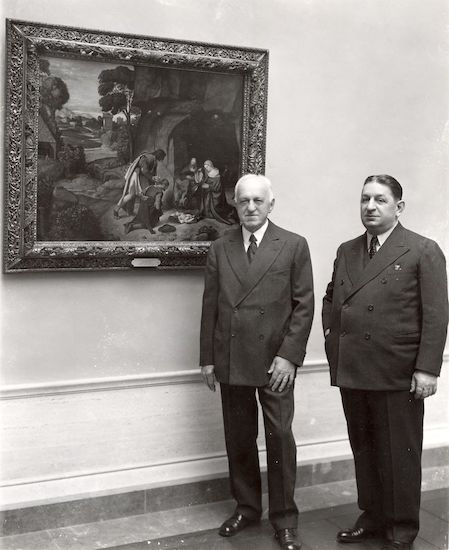 Pichetto had held concurrent positions as consulting curator at the Metropolitan Museum of Art and the National Gallery of Art. When he died suddenly in 1949, he left a significant void. Kress’s principal dealer promptly recommended a uniquely able successor: Mario Modestini (1907-2006), described to Kress at the time as having “the temperament of a master and without exaggeration the finest restorer in the world.” Modestini, pictured below with Rush H. Kress, was invited to the US and soon assumed the role of curator and conservator for the Kress Foundation. The center of his activity was lodged at Kress’s remote storage and workshop facility, Huckleberry Hill, located in the Pocono Mountains of Pennsylvania. This facility also played a key role in the distribution of the Kress Collection as a staging site where museum directors and curators would review incoming and outgoing paintings. Modestini, who served as Curator and Conservator of the Kress Foundation until the distribution of the Collection was finalized in 1961, ultimately played as wide-ranging and pivotal a role in the history of the Kress Collection as Pichetto had done, working (to cite a single example) closely with the team of scholars charged with producing a Complete Catalogue of the Kress Collection during the 1960s and 70s. 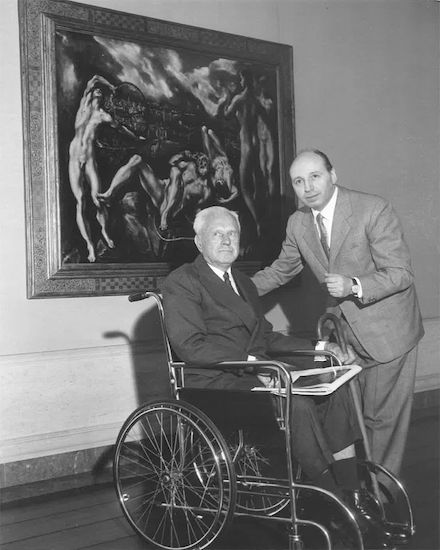 The Kress Foundation’s sense of responsibility for the ongoing stewardship of the Kress Collection survived the distribution of the Collection to dozens of museums across the land. Many of the regional and campus museums that now shared this stewardship role nonetheless lacked a professional conservation capacity, and especially expertise in the care of old master paintings, to this day a rare skill. Many paintings in the collection remained sound, requiring perhaps only ongoing superficial, cosmetic attention. Yet other works required more serious forms of attention as the years went by. Older restorations featured thick, yellowed varnishes and discolored retouching, sometimes eventually rendering the works unsuitable for display. Simultaneously, structural problems, characteristic of panel paintings and including flaking paint produced by fluctuations in humidity, began to emerge.

It was in response to the perceived need for ongoing attention to the condition of the Kress Collection that the Kress Program in the Conservation of Paintings evolved. In the fall of 1990, a pilot course for the conservation of Kress Collection paintings was offered by the Conservation Center at the Institute of Fine Arts at New York University. Several paintings traveled to the IFA to be cleaned and treated by graduate conservation students under the supervision of Dianne Dwyer Modestini. Judged a most promising success, this trial course expanded into the two-semester program we know today, coordinated, under Professor Modestini’s expert supervision, by a series of Post Graduate Fellows in Advanced Training in Paintings Conservation.

In significant ways, the NYU program has reconstituted the productive synergies of the early days of the Kress Collection. The IFA provides a singularly cohesive scholarly environment in which the conservation of works of art is deeply embedded in the study and teaching of the history of art in general. To date, more than 150 works from the Kress Collection have benefited from careful examination and treatment under the auspices of the program. Cooperating museums around the country have benefited most directly, not only receiving treatment of the highest quality for some of their most prized works of art, but also receiving all supporting documentation, including both art historical and technical analyses that can then be used in support of ongoing institutional programs by curators, conservators and educators.

Students participating in the Kress Program at the IFA are among the prime beneficiaries of the program. They learn essential skills and the experience of working with noteworthy paintings from around the country, while also becoming immersed in the long tradition of art conservation. Their examinations, treatments and research regularly lead to presentations and publications while also supporting their own academic and professional advancement. Finally, the field of art conservation has benefited significantly from the program. Graduates have gone on to work in distinguished museums and private studios in the US and abroad, and now constitute a key constituency in the ongoing development of the field of conservation.